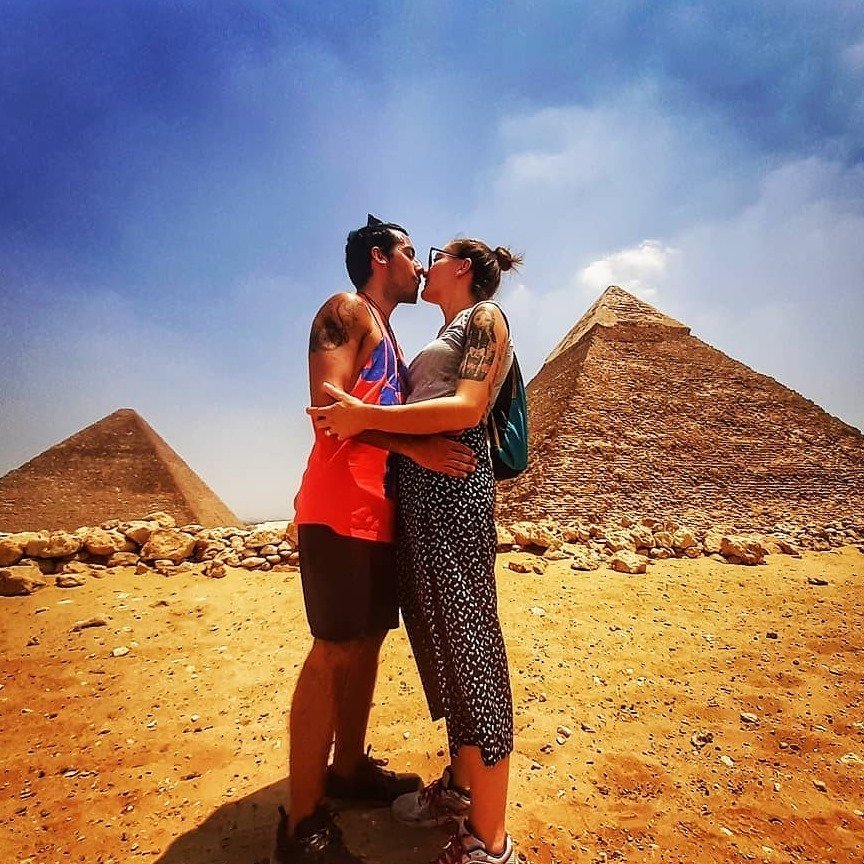 How to get to Giza Pyramids.

Here we leave you our “how to get to the Giza pyramids” guide.

Do you want to know how to visit the Giza pyramids? It’s really easy to get there with our instructions: we were luckily accompanied by our couch surfer, that’s why we recommend this way. We went by bus from Giza Square (medean el geiza). Here you have to find a man screaming “Haram, mashal rmaya haram!” (meaning “Giza pyramids”). We spent a small price of 5 Egyptian pounds (0,30 euros). There are no bus stops, so you should ask the locals where is the nearest stop to Giza. Be very careful when you arrive: There are many people wanting to bring you to the pyramids…going in the wrong and longest way! Only because they want you to pass by their store and convince you to by some souvenirs. So, our suggestion is: ignore all the people you meet along the way, when you arrive near the REAL pyramids entrance, you will know because you will see them from the outside!

We want to warn you: don’t try to take pictures from the outside if there are police officers in the way: they will oblige you to delete the pictures. They are pretty serious…

TIP: The exit is next to the Sphynx; from there you can take a blue bus till Tahrir Square. Here there are bus going everywhere, you only need to ask for the next place you need to go to.

The oldest pyramid in the world.

The oldest pyramid in the world is here, ladies and gentlemen: the pyramid of Menkaure, which is also the smallest of the three pyramids you find in this site, was built in 2490 BCE!

We were really surprised by how close you can get to the site: you can touch them and walk around them with no problems. The energy you can feel in this place is magical.

We have already said that THE oldest pyramid in the world is here, but also the other two aren’t free from wrinkles: the pyramid of Khafre, which is the medium by height, was built in 2520 BCE. Even if it is not the tallest, Khafre chose to build the pyramid on a bedrock foundation to give it the illusion that it was taller than the Great Pyramid. Smart boy…

Last but not least. The Great Pyramid of Giza (or pyramid of Khufu), the tallest, built between 2580 and 2560 BCE. This one is in the list of the 7 ancient wonders of the world, so you don’t want to miss the opportunity to see it, do you?

However these prices can change with the passing of the years, so we suggest you to check on the official website: http://www.egypt.travel/en/attractions/giza-plateau

While wondering in the Pyramids of Giza city, there are some tips we want to give you:

Watch our video on YouTube for the 5 best tips on Giza’s Pyramids!

How to travel for free…

We are a Digital nomad couple that travels working with social media and digital marketing.